Moxiyo helps delay the time that a fresh meat reaches Log 6, the bacterial count level that the food industry regards as an indication that the product is out of shelf life.

This first graph shows the effect of Moxiyo on the red color of the ground patties (a* value). There is a pretty clear effect of Moxiyo in the open space of the cooler (blue diamonds compared to purple “x”). a* values above 16 are representative of bright red ground beef, and the patties in the walk-in with Moxiyo remained above this threshold for 1 week. 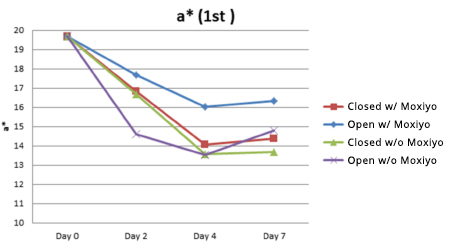 A test study was done by MBi Nutraceuticals using fresh chicken. Using chicken packaged with Moxiyo it was found after 21 days that there were distinct improvements with regards to smell, appearance and baterial plate counts. The chicken NOT using Moxiyo smelled spoiled and the bacterial plate counts had rapidly increased”.

Given FAO (Food and Agriculture of the United Nations) and G7 warnings about the need to increase food productivity 75 per cent by 2050, it is reasonable to assert that food security will become the paramount societal and scientific issue for the foreseeable future.

Technological innovation will be pivotal against a backdrop of climate change and increasing competition for natural resources in a global food industry worth over $5 trillion per annum.

With this global industry that is set to grow exponentially over the next two decades, the stage is set for novel application of technologies for sustaining and preserving foods.

Select the fields to be shown. Others will be hidden. Drag and drop to rearrange the order.
Click outside to hide the comparison bar
Compare
Compare ×
Let's Compare! Continue shopping